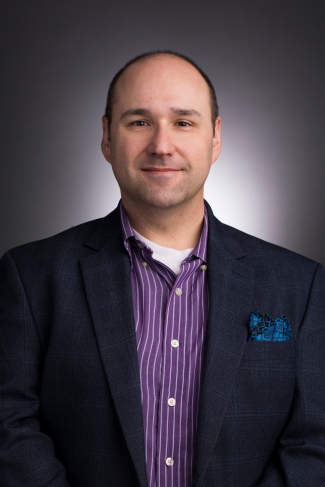 Headshot of people who are receiving Awards at Utah Valley University in Orem on March 15, 2018. (Hyeju Kim, UVU Marketing Department)

Steve was born in Meriden, Connecticut in 1977.  He grew up there and in the adjacent town of Southington, where he graduated high school in 1995.  That fall, he began his undergraduate studies at Boston College, initially declaring a biology/history double major, but later changing to biochemistry.  He conducted research for two years in the laboratories of Professor T. Ross Kelly, studying natural product total synthesis, and completed the first total synthesis of the anti-cancer pyrroloquinazolinoquinoline natural product luotonin A.  In 1999, he moved to sunny Irvine, CA to begin his graduate studies at UC Irvine.  In the laboratories of Keith A. Woerpel, he developed synthesis routes to six different mono-substituted, eight-membered cyclic oxocarbenium ion precursors for study using nucleophilic substitution reactions and computational analysis of the putative oxocarbenium ion intermediates.  He also synthesized and obtained X-ray crystal structures for two C4-substituted six-membered ring dioxocarbenium ions to establish the disparate conformational preferences of these reactive species when a remote alkyl or alkoxy substituent is present.  He next moved to Colorado State University for a postdoctoral appointment with Distinguished University Professor Robert M. Williams. There, he focused on the synthesis of several putative early- and late-stage biosynthetic intermediates of tumor-killing natural products mitomycin C and FR-900482, which led to the first significant advance in the understanding of their biosynthesis in decades.

You can also connect with me on LinkedIn